Welcome to this aviary of a post. I suddenly have so much to say, and I'm not sure I can get it all out before all the half-way decent bedtimes pass me by. This is going to be a long one, so grab your boots if you're coming with.

I found this charming description while browsing a travel magazine from 1993. It lay across from a brunette on a boat, her back to the camera, looking out over the water. 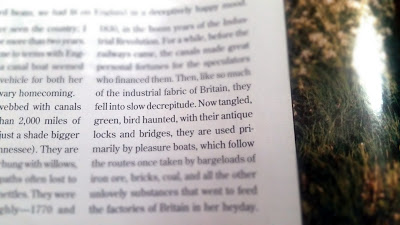 I am bird haunted. 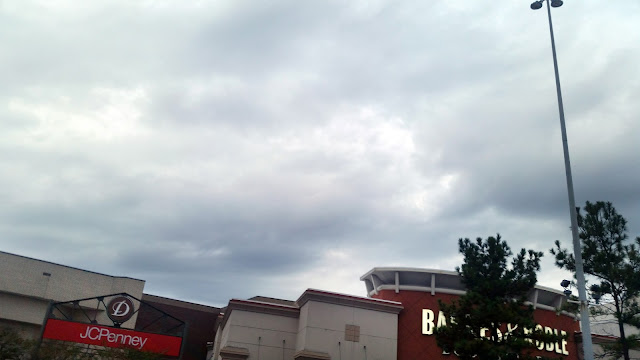 The mall has always been a wonder to me. When we were little girls, and Grandma descended from the coast, there would always be at least one trip to the mall to buy things: irrational things, whims, stupid hats and stupid shirts, anything we wanted. Today, as I sat in the coffee lounge, I felt the years I'd wandered wide-eyed through its over-zealous vendors, photobooths and bookshelves, clothing racks full of shiny things -- felt them all press against my ribcage across from my mother as she bounced my nephew in her arms and said she was glad to see me. I was little and full grown all at once; I was the baby she dandled on her knee; I was the girl choosing her dad's side under her mom's roof.

I asked what she planned to do for her birthday; she's just turned 43.

The faint crows feet at the corners of her shiny brown eyes showed as she smiled and said, "I'm doing it now!"

The ends of her deep black hair are still purple somehow, the same shade as the stripes on the shirt I wore to our get-together. I burned my tongue, and she tried to keep hers from swearing in front of me. When her husband called as she drove me back to my car, she almost couldn't get all her words out without his voice on the other end cutting her off, snapping about this and that while she tried to explain why she wasn't home yet or answering his calls. She said she was happy with him as we turned into the parking lot. I couldn't tell if she was saying it to me or to herself.

When my mom hugged me goodbye tonight, I was even taller than usual because of my heels. A girl I met at school taught me how to walk in them. We shared a room for four months, and she and I gave each other a lot of unforgettable things: clothes and crockpots, advice and jambalaya, prayers and promises. She once told me, upon seeing one as we walked in the February chill, that cardinals are messages from passed loved ones, red messages on wings, saying, "Everything's gonna be alright."

I haven't heard from her in a long time. And then a cardinal flew past me in a River Hymn.

There used to be a turkey feather that traveled with me, pressed to the ceiling under the passenger-side sun visor of my car, a gift from The Man Who Lived Across From Me. It was fun to watch my teacher jump whenever it flew into his face.

"What's the matter?! Scared of feathers?" 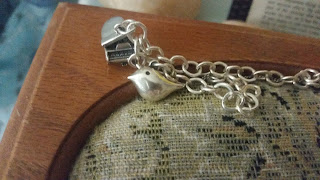 Fun fact: the birds actually started a few years ago, with my mother. They were hers before they were mine, like a strange inheritance. They were her special symbol toward the end of her marriage to my dad. She bought them as gifts for friends and relatives, she sewed me a robe out of them before I left for school, and we wore the same little bauble on our James Avery charm bracelets for a year. Her bird represented me, and my bird represented finally feeling close to her. 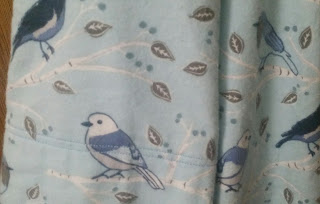 I don't understand the chase these things give. I wonder if I'll finally be empty of them whenever I get this Thing out of me. I wonder if my brain will stop being on the hunt for them, if I'll scrap all the bits of them I keep stuffed in closets and on a canvas in the corner of the music room. I'll still wrap that robe around my shoulders when I'm done showering; that little silver bird will still be in its orange box in my blue chest of drawers when this season is over; the songs will still be full of feathers and wings -- so will the sky, so will the Scriptures.

While my dad held his grandson after church tonight (for the the first time since before Thanksgiving), the baby flapped his arms and lunged forward on his grandpa's knees, brown eyes alight as he stared at things only babies can see.

"Put feathers on that boy and he'd fly away," chuckled our pastor's father as we watched. "He's like a bird, alright."

And then the woman that called us Redbirds last winter -- the one that lifts everything from heavy wheelchairs to heavy hearts -- showed me the song below.

It can't possibly get more coincidental than this, but we'll see, won't we...

You can set your boots in the corner, now, the hike's over. ;)

"We're all just a hair's breadth away from being birds..."
-Dick Lauden, Newhart, Torn Between Two Brothers